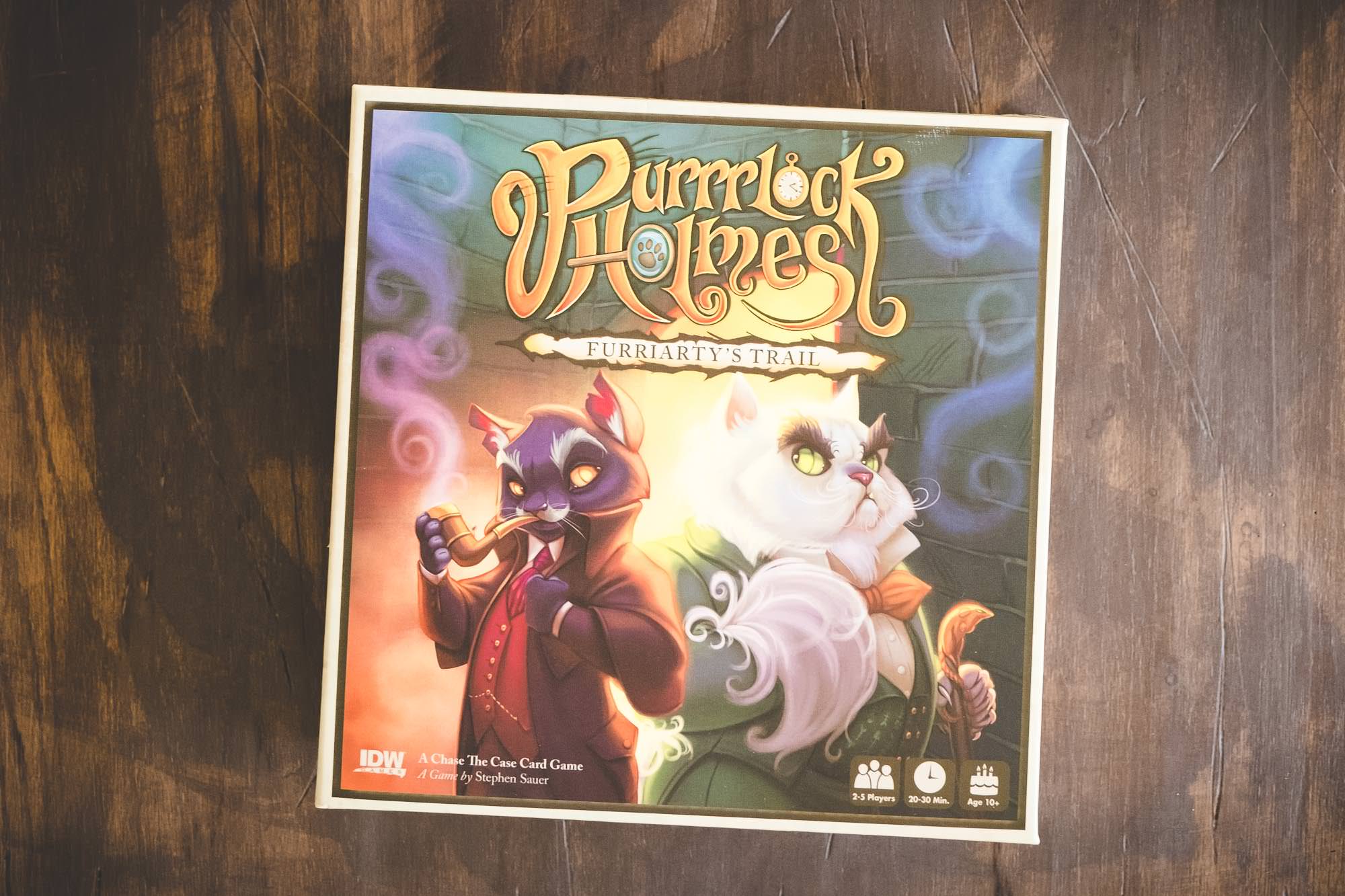 When I was young, I played the game of Clue every chance I had. As a lover of all things mystery & Nancy Drew, I thoroughly enjoyed the process of tracking down the killer, using my deductive reasoning skills. But over time, I grew tired of racing around the mansion, looking for Colonel Mustard and the candlestick. So much so, that I don’t know if I’ve even introduced Clue to my 11-year-old.

However, I still find myself drawn to games that require logic and deduction. So when I heard that there was a new game where players tracked down a bad guy through clues and logic, and when I saw that the theme involved a bizarre mix of Sherlock Holmes and….cats…. well, I had to check it out. 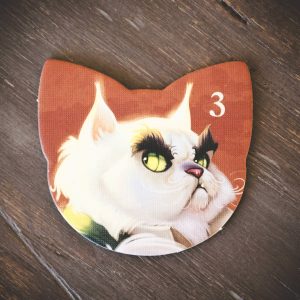 Okay, yes, the name is just a little bit cheesy. But let’s put that aside for a moment.

Purrrlock Holmes is a quick-playing deduction game in which players act as feline Inspectors in the “Scotland Pound.” The Inspectors are hot on the trail of arch-villain Furriarty, who is terrorizing the town. Furriarty plans to escape after committing all his dastardly deeds, so the Inspectors need to catch him quickly.

The game is “semi-cooperative,” which means that players have to work together to some extent, or else everyone loses the game. But if they are successful in their collaboration, and capture Furriarty, there will be an ultimate individual winner.

Sample layout for a 2-player game. See gameplay section below, for information on how this all works. 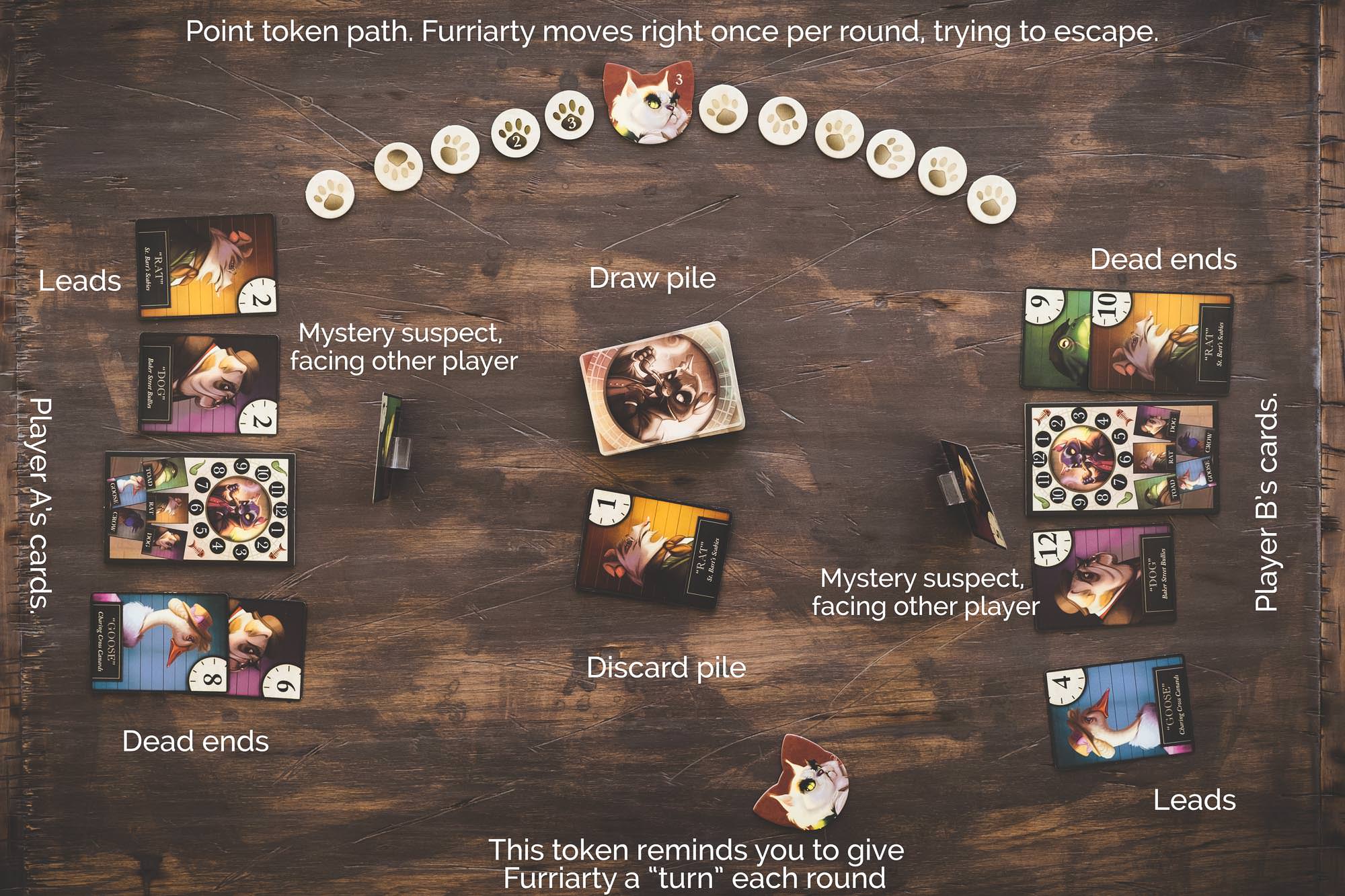 In Purrrlock Holmes, each player is working through a series of criminal cases on the path to ultimately catching Furriarty.

A criminal case is represented by a suspect card placed in a stand in front of the player. This mystery card must face away from that player, but remain visible to all other players. 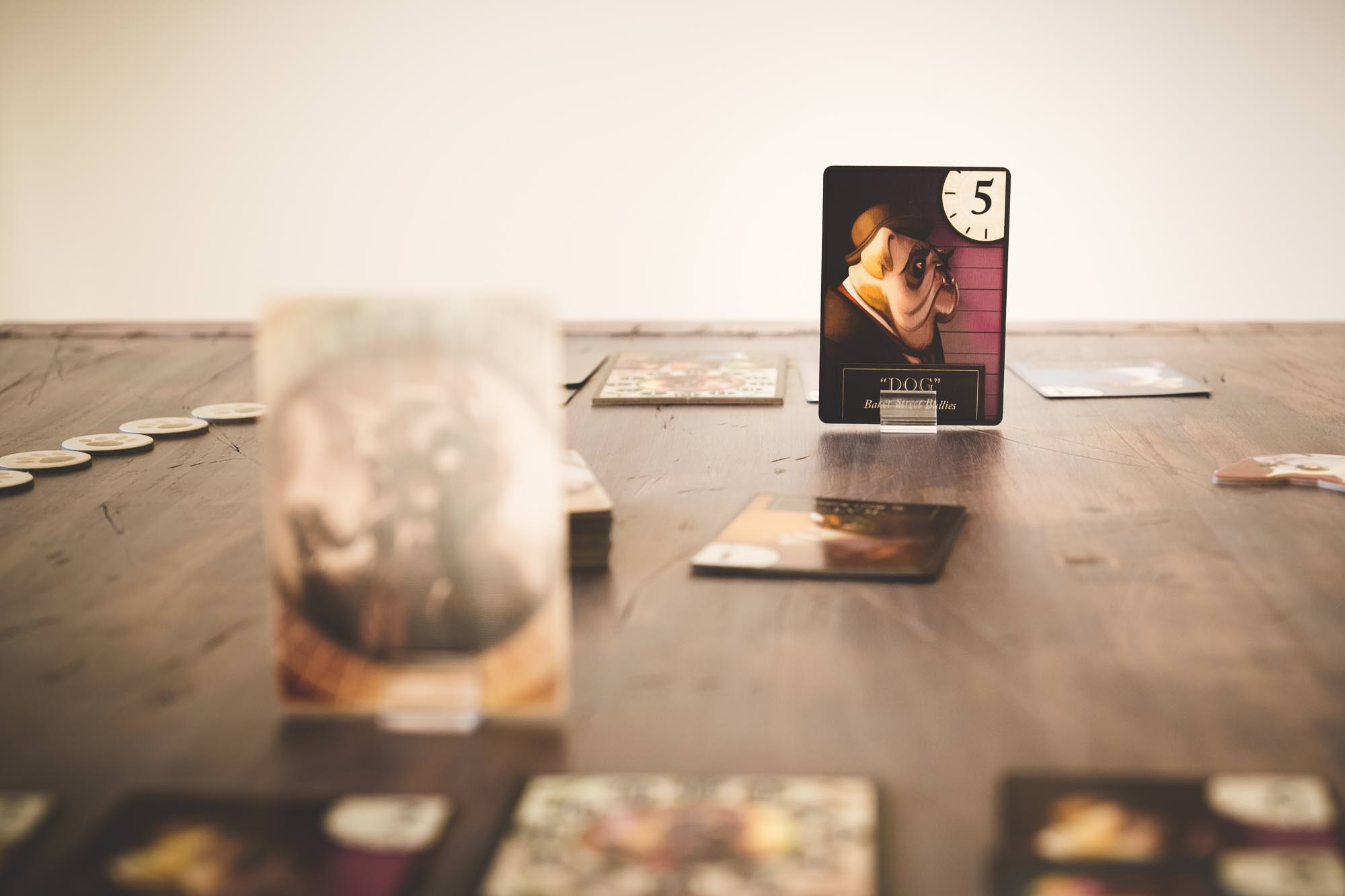 All suspect cards contain both a character/suspect (one of five different bad guys) and a time (one of the 12 hours on a clock).

On your turn, you may Investigate, and you may Guess.

When you Investigate, you place a suspect card from your hand on the table in front of you. The other players will compare that card to the mystery card in your stand, and tell you whether the card you just played is a lead or a dead end.

It is a lead if one or both of the following is true:

Once you know whether it’s a lead or dead end, you’ll place it in front of you, keeping your leads and dead-ends organized, to aid in your deduction.

If you choose to guess (an optional part of your turn), you may guess either the suspect/character or the time of the crime, or both. Feeling brave and want to guess both? In that case, you must get them both correct, or your guess will be considered entirely wrong.

If you guess correctly, take a point token from the left side of the token path (or take two if you guessed both the suspect and time correctly).

When your turn is over, pass the cards remaining in your hand to the next player, and draw two more. Play continues, with players investigating their cases, guessing, and starting new cases (after a guess) as they go along.

Each time everyone at the table has taken a turn, Furriarty moves down the trail of point tokens, on his way to his escape. The game will end when one of two things happens:

If the players catch Furriarty, everyone wins! The player with the most points (from point tokens earned during the game) becomes the Chief Inspector, and is the ultimate winner.

If Furriarty escapes, everyone loses. (Also, the person with the fewest points gets demoted to Litter Box Inspector.)

Side note: there is one more twist in the game. Each player can — once per game — jump in to make an extra guess at any time, even during another person’s turn, in exchange for losing one point at the end of the game.

Purrrlock Holmes plays quickly. Our games have lasted 20-30 minutes, which feels just about right. It is what I would consider a “filler game” — it’s not too heavy, and not too long, but certainly scratches that boardgame itch.

The game can feel fairly tense. In one two-player game with my husband, I remember thinking we were never going to catch Furriarty, and were doomed! (In the end, we did catch him, but it was a close one!) I like that feeling of stress and tension; and it’s a feeling I tend to get in most cooperative games. Apparently, I can handle someone other than me winning, but I have a much harder time with the idea that we might *all* lose. In Purrrlock Holmes, there’s a chance that our nemesis will actually escape and we will be defeated as a group.

Because of the semi-cooperative nature of the game, I find myself torn between wanting other players to “GUESS CORRECTLY ALREADY, so we can catch the bad guy!” and wanting them to *not* guess correctly because I want all the points for myself. It’s a balance, and a delightful one.

There is some amount of luck involved in this game. It can be possible to quickly figure out your mystery suspect, depending on the cards you receive and play. Other times, it can take turn after turn before you have any clue which suspect or time is on your mystery card, adding to the tension.

One of the things I like best about this game is that there is essentially no downtime. If it’s not your turn, you are either letting another player know whether they’ve played a lead or a dead end, or you’re trying to figure out if the leads and dead ends you’ve already played can reveal the answer to your own case. 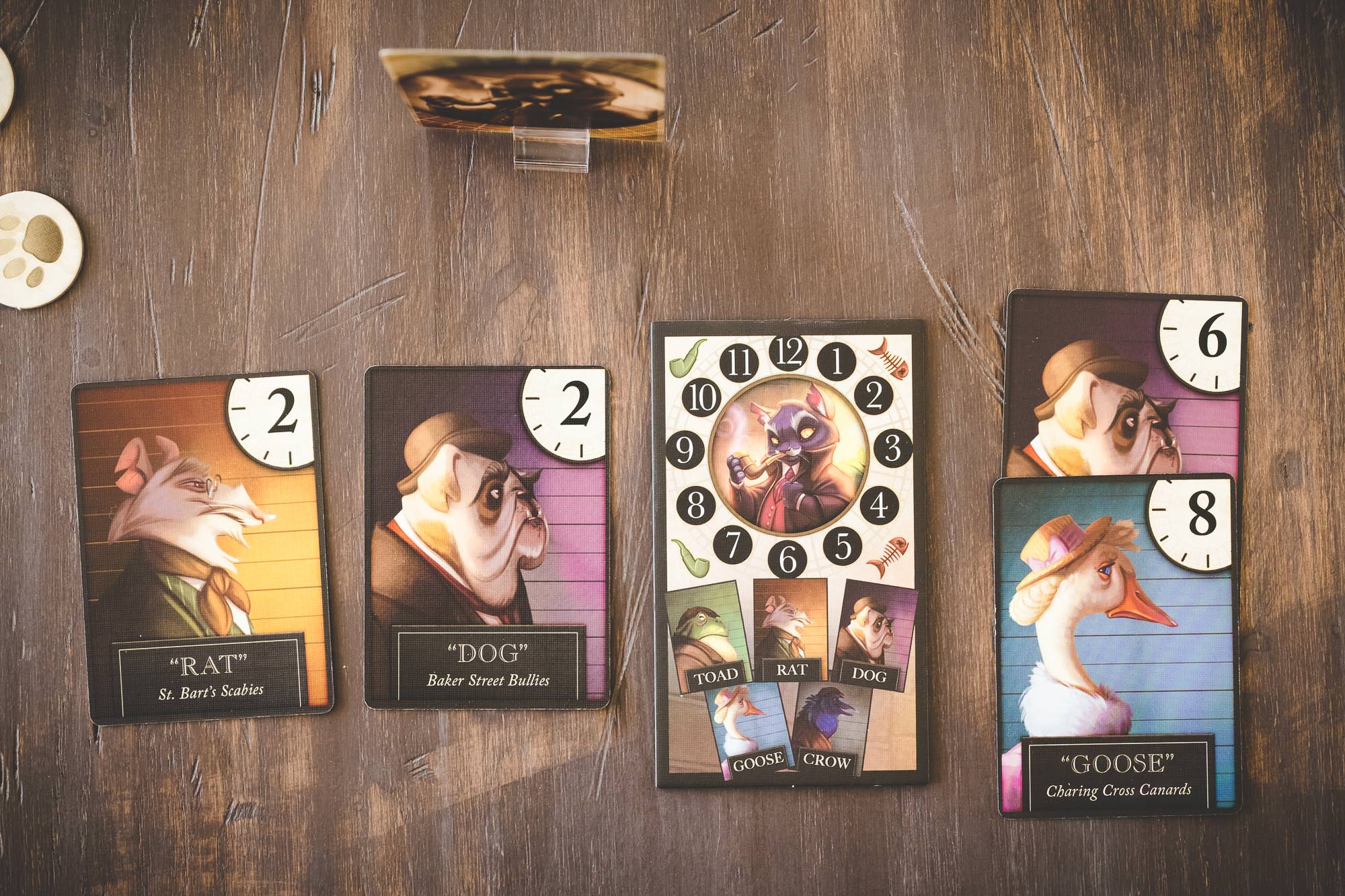 Because players must make well-reasoned decisions about which cards to play in Investigations, as well as which cards to pass to the next player, this game is a little more advanced than simpler deduction games. Our 11-year-old plays (and has beat us), but young children might have a hard time knowing which cards to play, or reasoning out the clues they receive. The box says ages 10 and up, and that sounds right to me.

Purrrlock Holmes is for 2-5 players. I’ve played it at both 2-player and 3-player counts and it worked well in both cases.

The artwork is fantastic. The suspects belong to “punny”-sounding gangs, and the mugshot theme of the suspect cards is just perfect.

Purrrlock Holmes is a great little sleuthing game, with just enough tension to balance out the silliness of the theme. It’s easy to learn, plays quickly, and makes a nice after-dinner family activity. It fits the deduction niche in our family board game collection, and as a bonus, is a fun way to teach kids logical reasoning.

Purrrlock Holmes has earned a place on our shelf, and I’m so glad we discovered it!

You can find Purrrlock Holmes on Amazon.com. 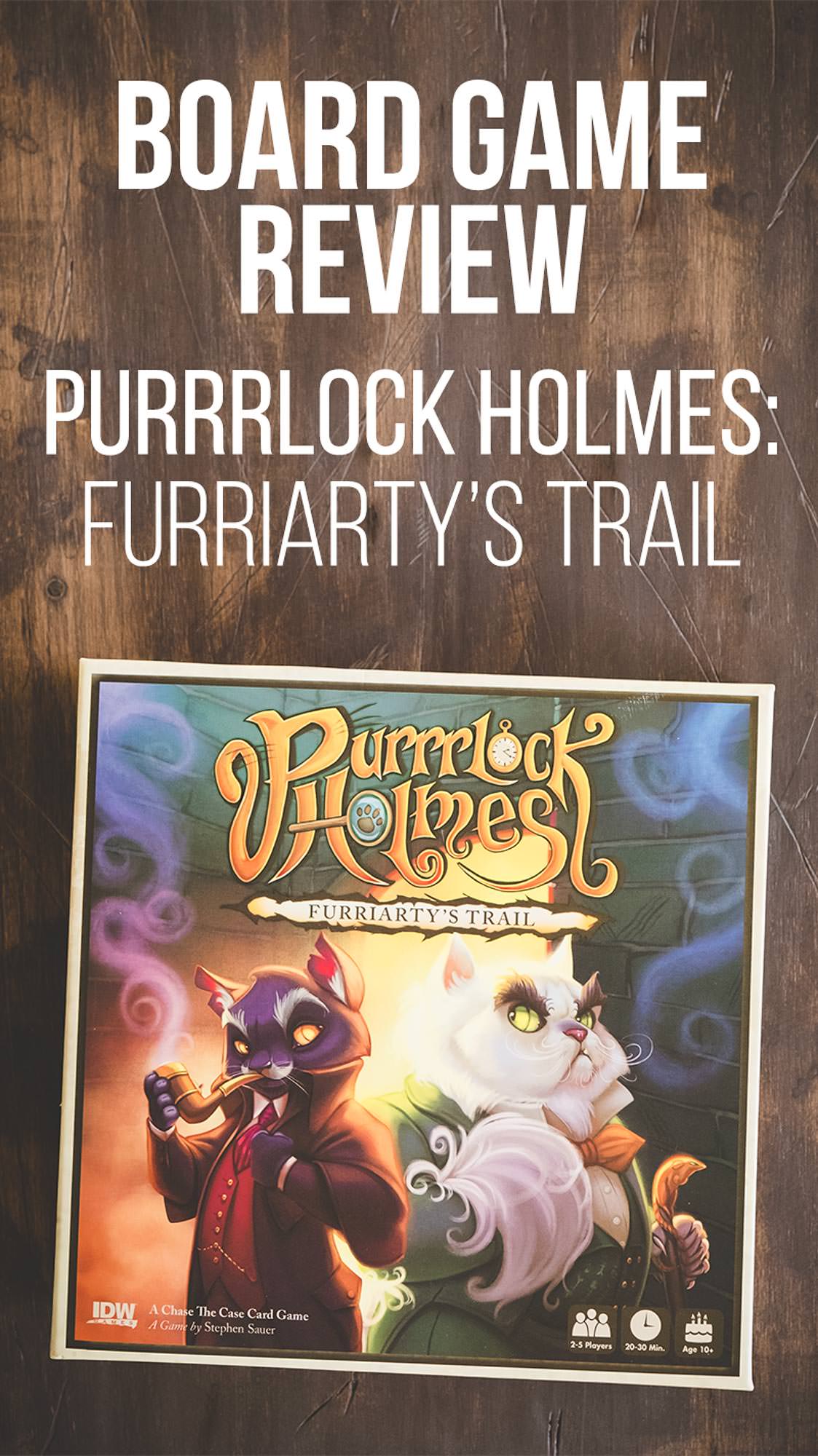