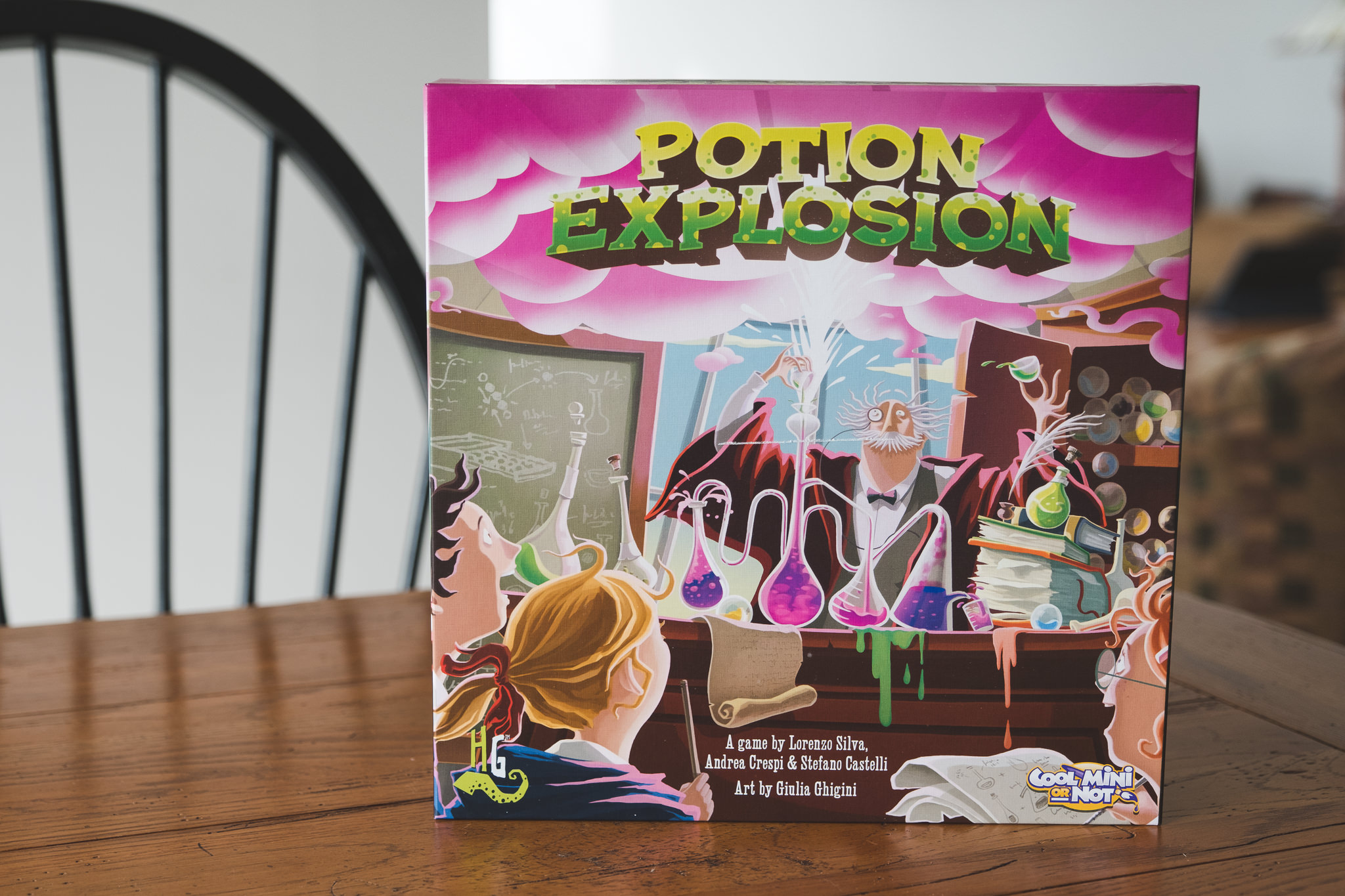 Take the color combination explosions of Candy Crush, the click-click of marbles hitting each other as they roll down cardboard tracks, and a bit of rummy-like set collection and you have the game Potion Explosion. A light and fun family game with multiple paths to point-scoring, Potion Explosion is a colorful, tactile, and easy-to-learn game for kids and adults.

In Potion Explosion, players are students at the “Horribilorum Sorcery Academy for Witty Witches and Wizards,” taking their final exam in Potions class. 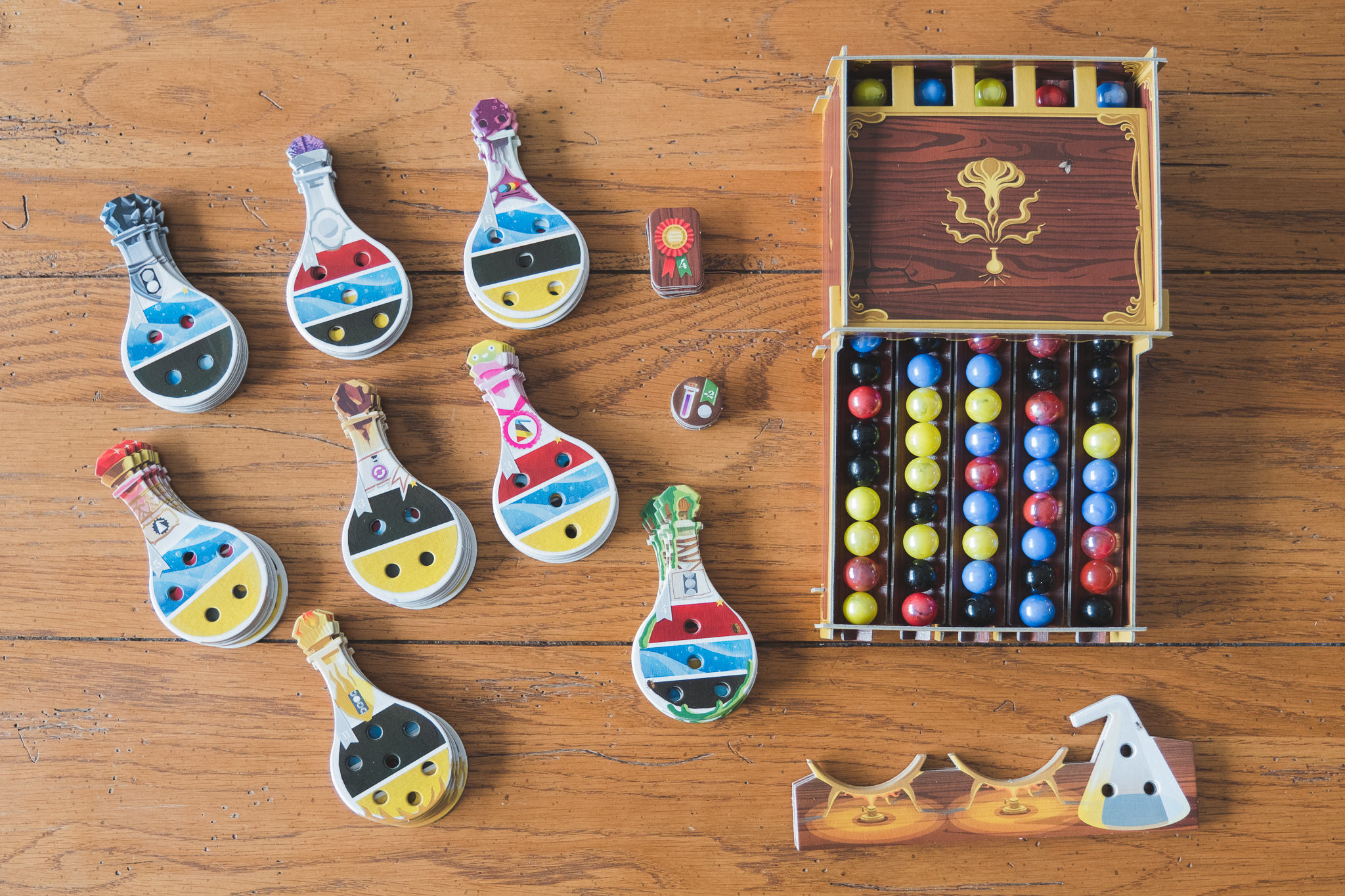 When you first play Potion Explosion, you’ll immediately notice the way-cool marble dispenser. (Note: you’ll have to assemble it yourself, so set aside some time before your first game to do so.) The dispenser has five angled cardboard tracks which allow marbles to run down them, maintaining a grid of marbles throughout the game. Pour the mix of red, blue, yellow, and black marbles into the top of the dispenser and it’s ready to go. 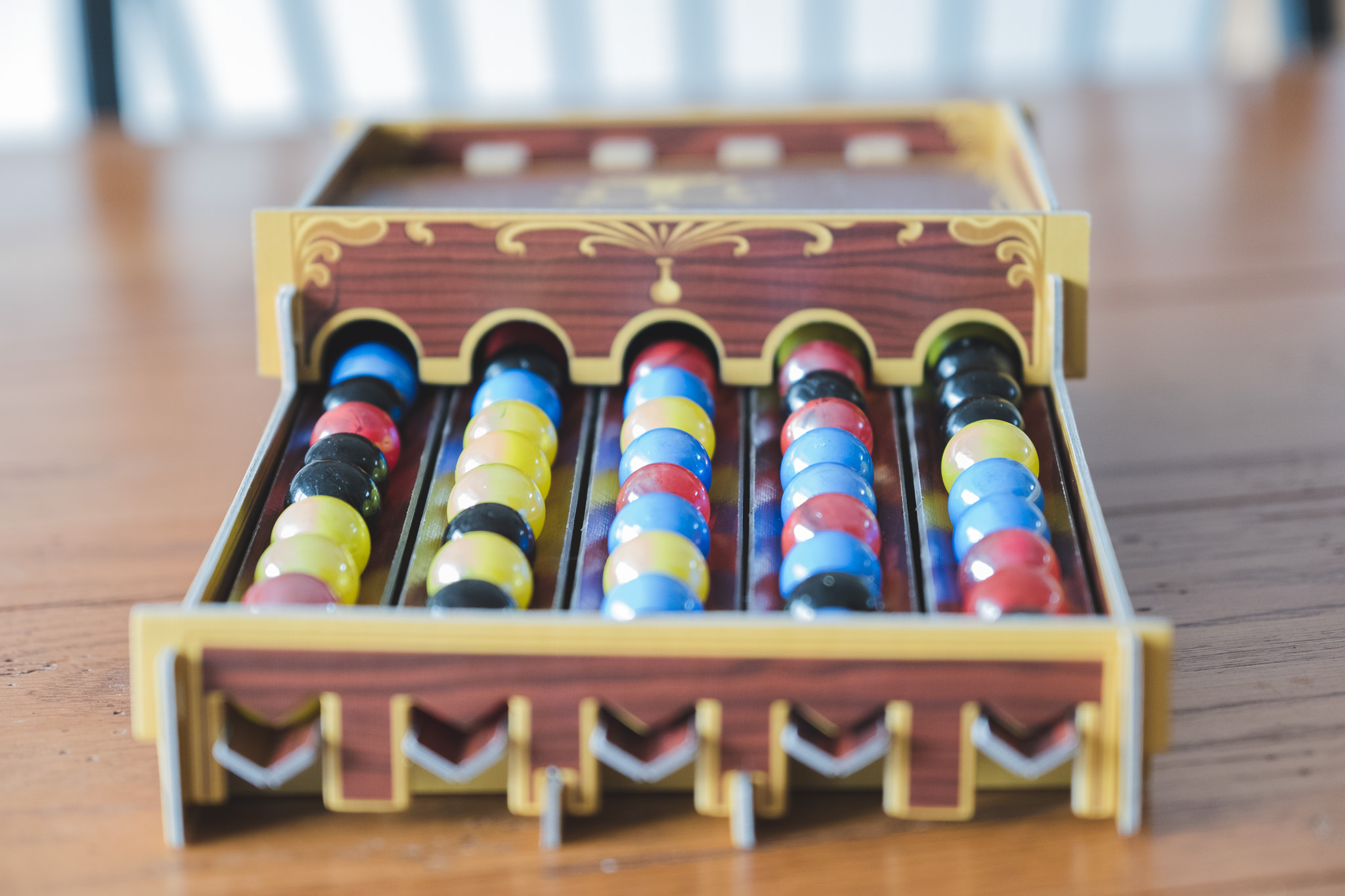 In Potion Explosion, each player has a “desk” in front of them containing an empty “flask” and two spaces which will hold potion flasks. 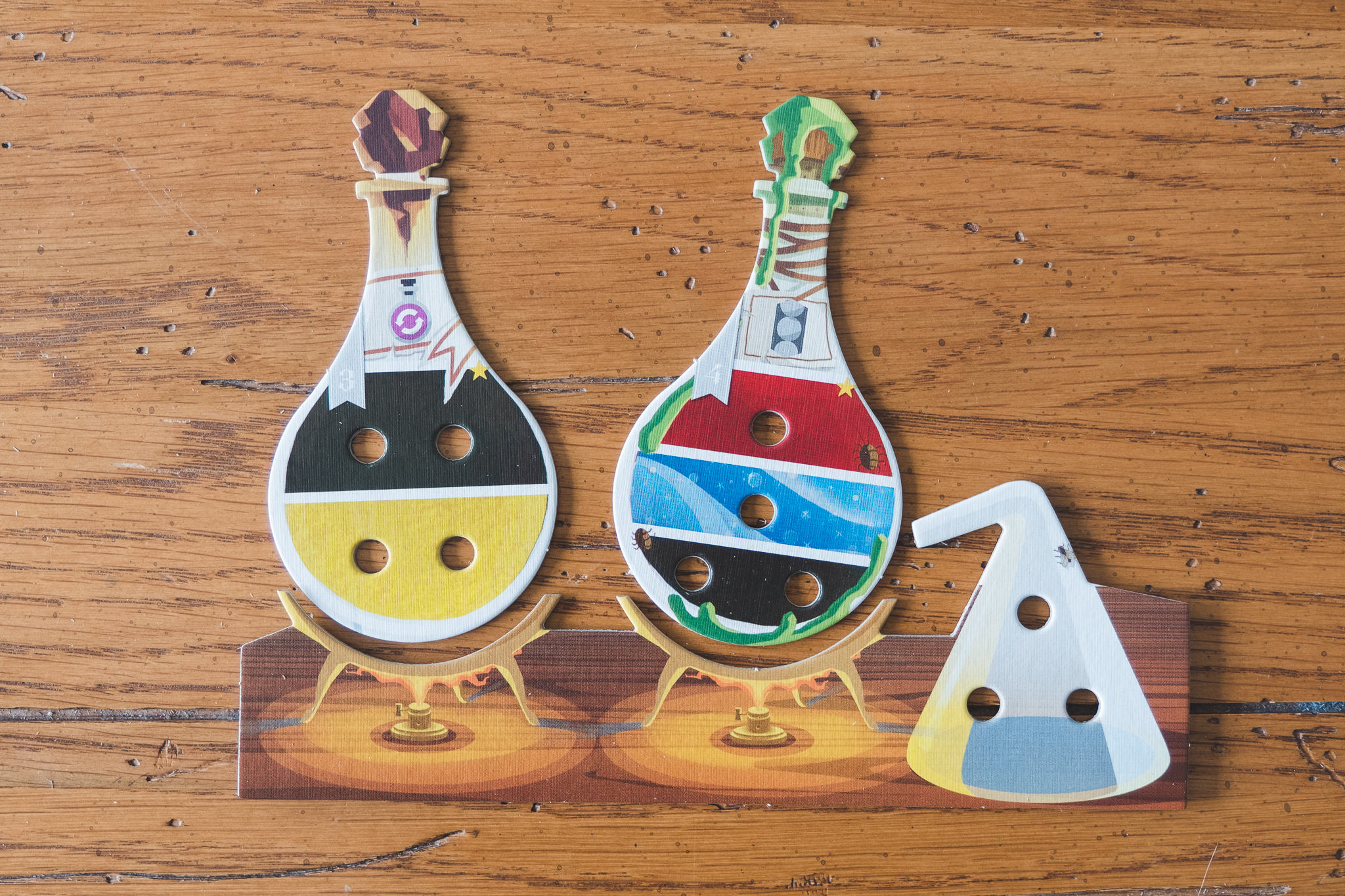 On your turn, you will choose a marble/ingredient from the dispenser. This is where the fun begins. When you pull a marble out of the dispenser, there is a chance that it will set off an “explosion.” An explosion occurs when a player removes a marble, and the marble above rolls down and strikes another marble of the same color. When that happens, the player can take those marbles as well! Chain reaction explosions can occur and in some cases, the player can end up with quite a haul of “ingredients.” 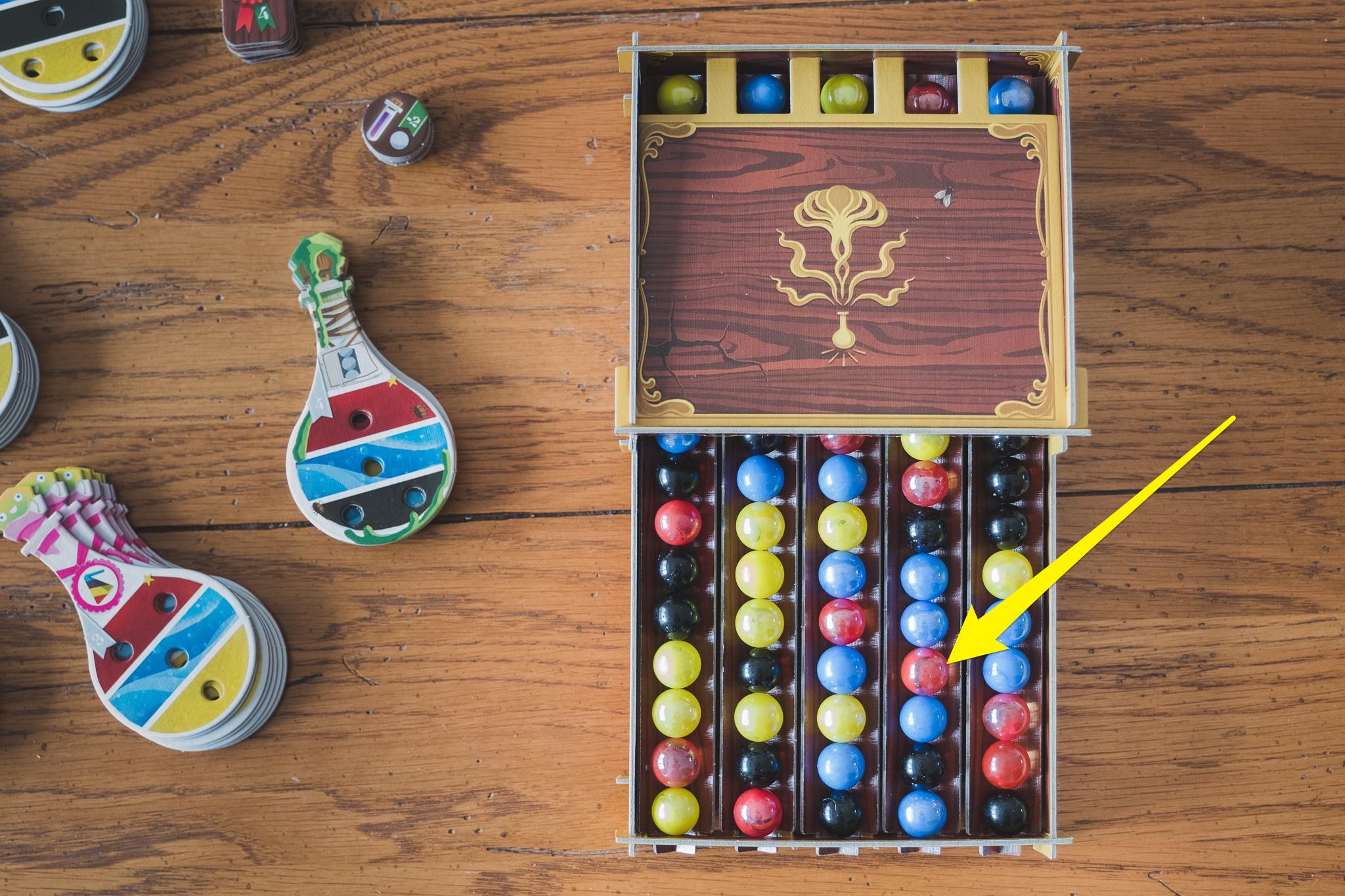 During your turn, you can also choose to ask for “a little help.” In that case, you can choose one additional ingredient from the dispenser in return for accepting a “-2” token that will subtract those points from your score at the end of the game.

Once you have your marbles/ingredients, you will place them in the matching colors on the potion flasks you are trying to complete. You can then keep up to three marbles for the future in the extra flask on your “desk.” Return any remaining marbles to the dispenser. 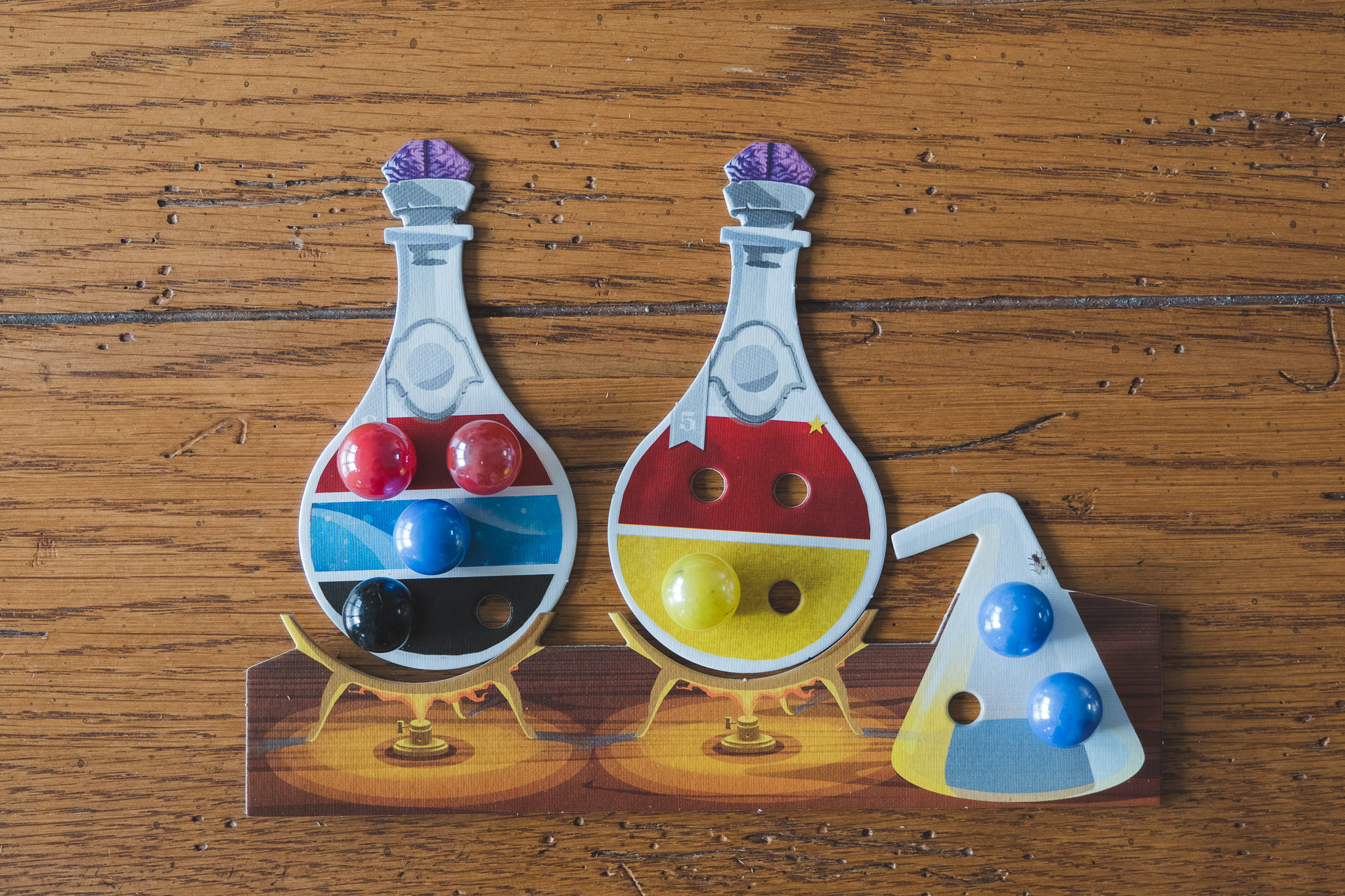 As you complete potions, you will earn points and also gain access to special powers. Completed potions can give you the ability to choose additional ingredients on your turn, steal ingredients from other players, or use ingredients as “wild cards” in any color of a potion flask.

You will draw new flasks to replace any potions you complete, and can work on two potions at any given time.

The end of the game is triggered after a certain number of Achievements have been reached by the players (the number of achievements varies based on the number of players). After that, play continues until all players have had the same number of turns over the course of the game.

Finally, players count the points they’ve earned through potion completion and achievements, and subtract any points for asking for “help.” The player with the most points wins.

Potion Explosion is a game with beautiful components, simple game play, and an enjoyable tactile experience. As a seasoned Candy Crush player, I admit that I enjoyed creating “explosions” in the marble dispenser. I also appreciated that every turn presented me with a variety of actions to take as I sought to collect ingredients and complete my flasks — I could use powers from completed potions, take “help” tokens, and create marble explosions.

I was surprised that the box recommended the game for ages 14 and up, since L. (age 10) had no problem understanding the game, and thoroughly beat Chad and me in the first game the three of us played together.

At 30-60 minutes, the game doesn’t overstay its welcome. It’s a light game, and if it went on too long, it could become tedious. But in the games we’ve played, the length seems just about right.

Overall, I recommend Potion Explosion if you’re looking to add a 2-4 player game to your family game nights. The game moves quickly, and is easy to learn and to teach, but still provides players with plenty of decisions to keep things interesting.

You can find Potion Explosion at Amazon.com.

8.5 Overall Rating
Replayability8
Fun Factor8.5
Kid-Friendliness10
Interesting Decisions8.5
Summary
A fun family game for 2-4 players. Play time is 30-60 minutes. We recommend this game for ages 10 and up, though younger kids may enjoy it as well. 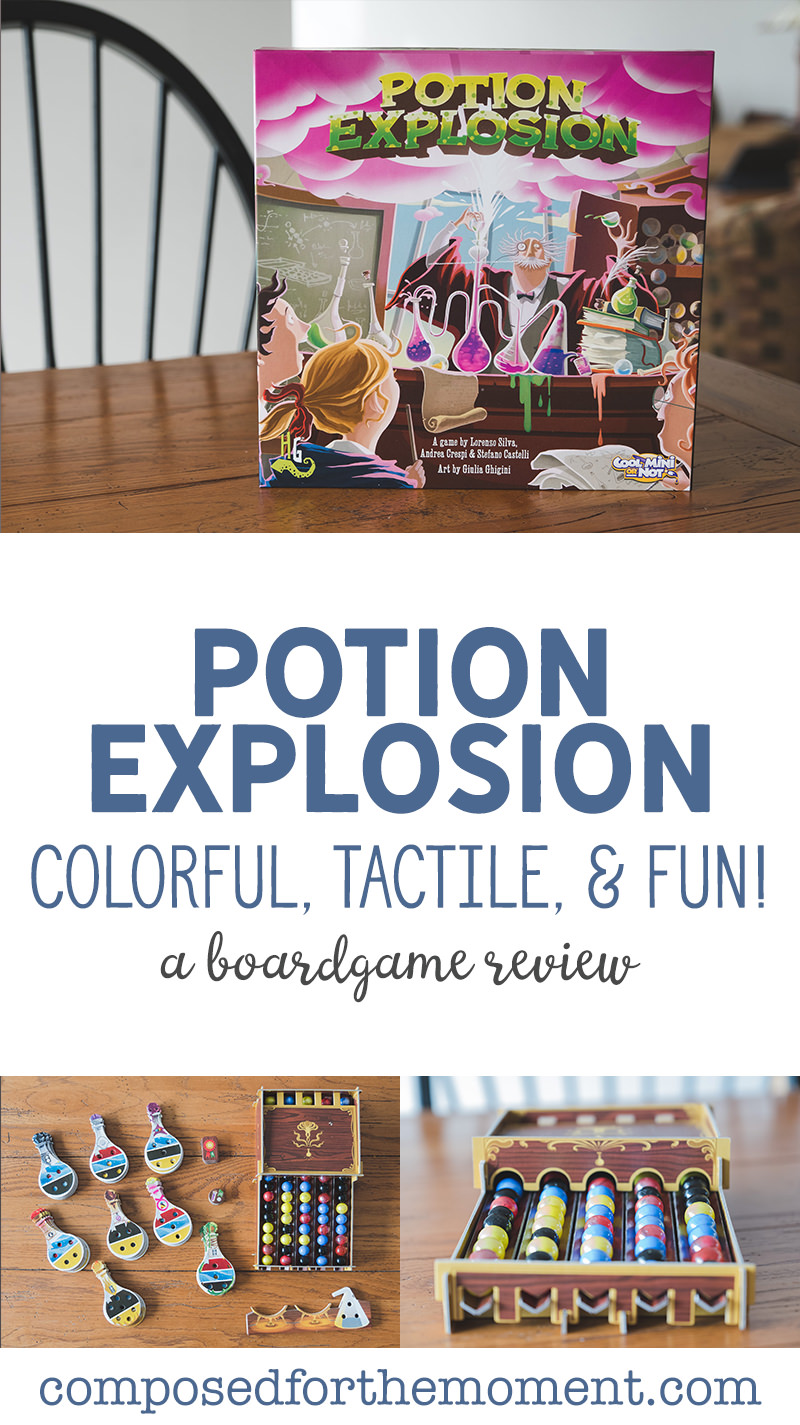