As a homeschooling, introverted homebody, I do a significant amount of my shopping online. What’s not to love? Push a button, wait a few days and — voila! — a package shows up on our doorstep with exactly what I needed.

As Christmas approaches, I’ve been shopping online not just for gifts, but also for supplies for any entertaining we’ll be doing. Recently, I ordered something yummy from Williams Sonoma that needs to be kept frozen until our family gathering on the day after Christmas. Yesterday, that item arrived.

It came in a big styrofoam container, nestled snugly on a bag of…dry ice.

This may not sound very exciting to you. But since I am a) a geek; and b) a homeschooler, I was thrilled. Dry ice is just not something we usually have lying around the house, so here was a chance to have fun, and maybe even learn a little something.

L. and I talked about what dry ice is, watched a few YouTube videos about dry ice & stuff to do with it, and learned that the reason we shouldn’t touch it is because it is approximately negative 109 degrees (Fahrenheit). Anything longer than a very brief poke carried the risk of instant frostbite. Needless to say, we decided to use the long grill tongs for all our handling of the dry ice.

The fun began. My plans for an afternoon nap were abandoned as we spent a couple hours playing with the dry ice. Here are some things we did:

It doesn’t get any easier than this. We filled a glass about two-thirds-full with very warm water, added a chunk of dry ice, and watched as it bubbled away, creating “clouds” right there in our kitchen and dining room. Under normal circumstances, dry ice “sublimates” — which means it converts from a solid directly to a gas at temperatures over -109.3. Adding it to warm water speeds that process along, creating dense, flowing vapor that is way cool to watch. 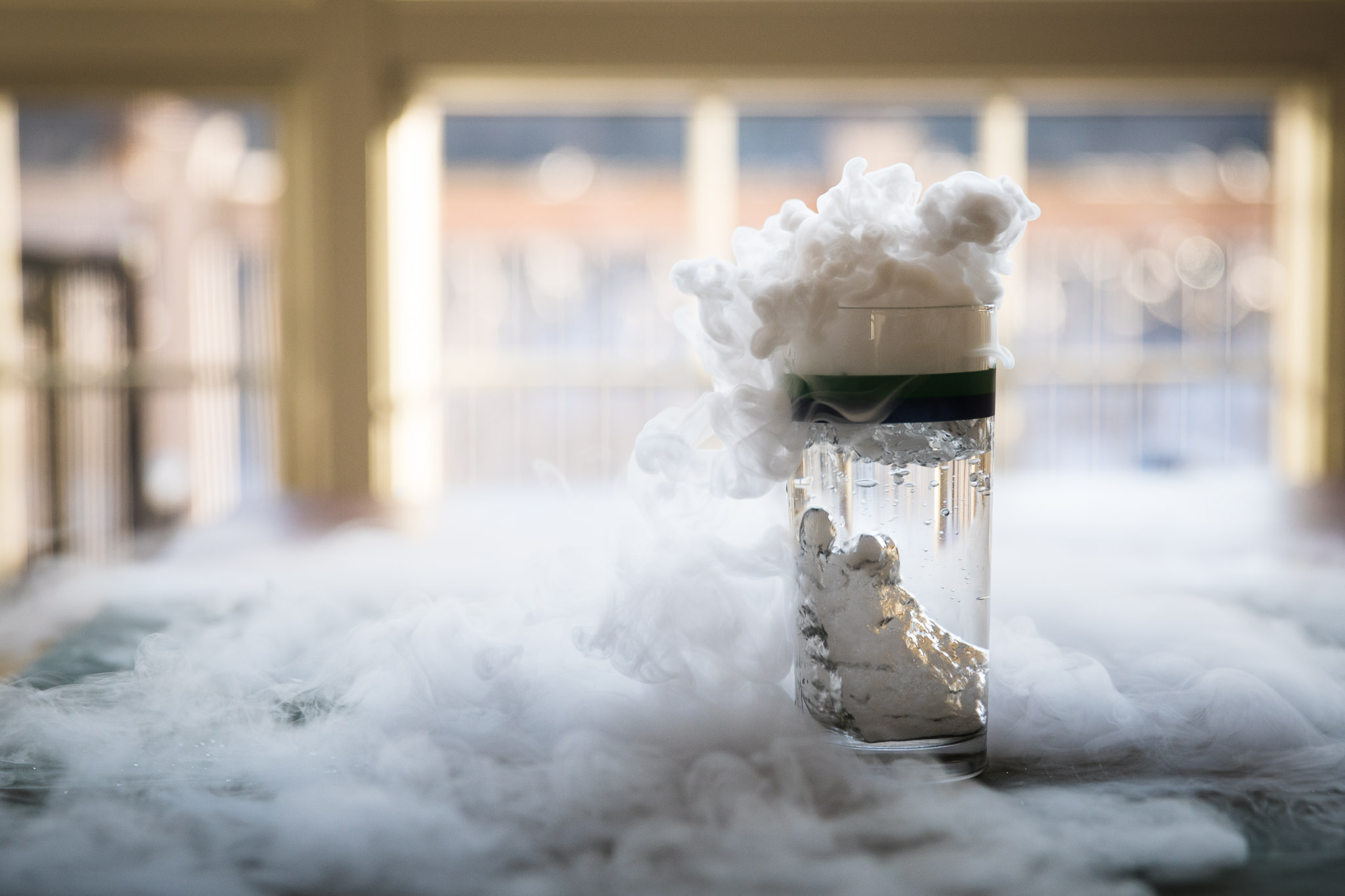 No lie, I could have watched this for hours. But I am sometimes easily amused.

As the dry ice cools the water, the sublimation slows down and the “clouds” decrease. But that’s okay. We just dumped the cold water, added more warm, and the fun began all over again.

L. had plenty of fun blowing the clouds around, but often ended up with a face full of vapor. 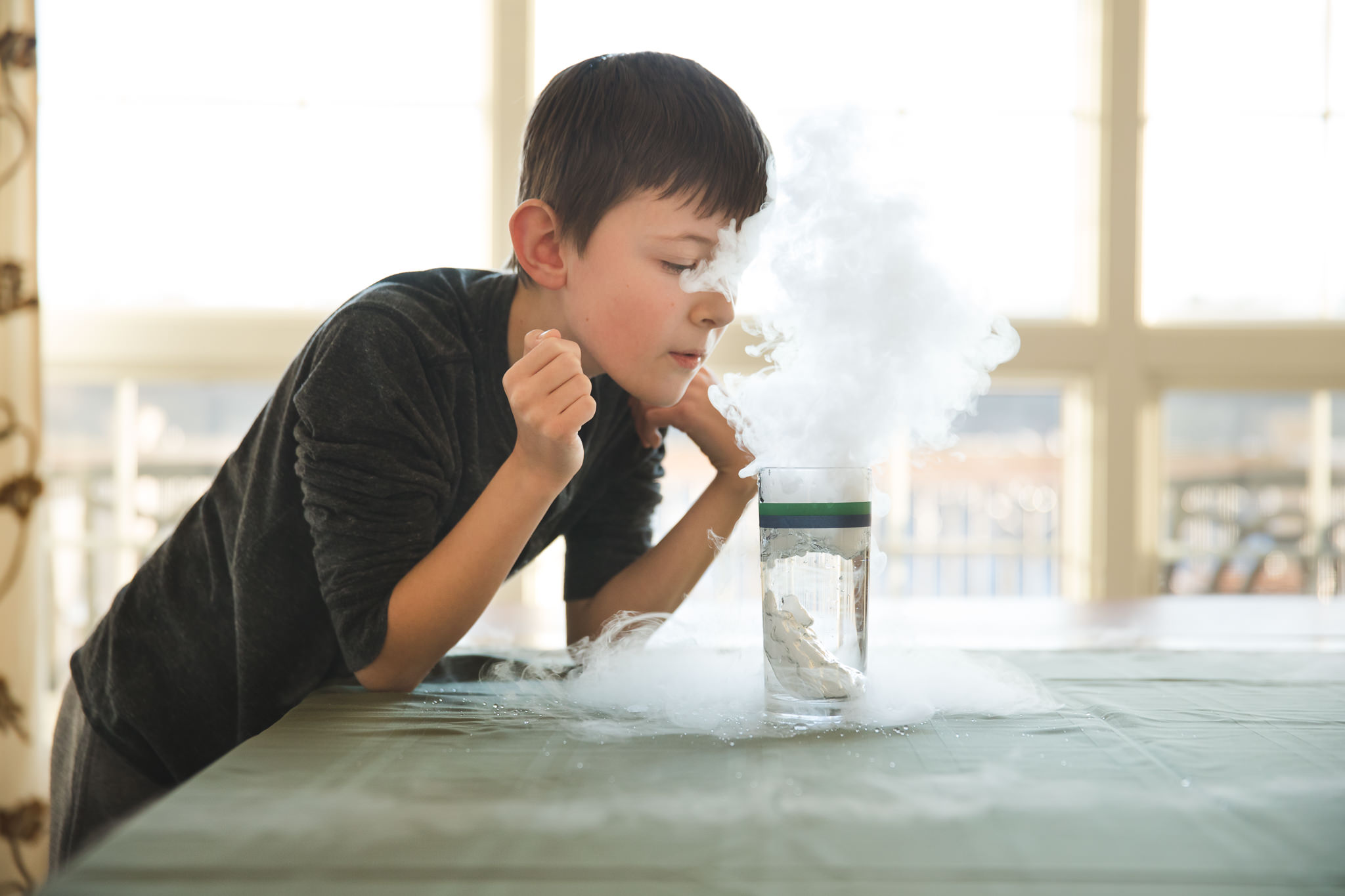 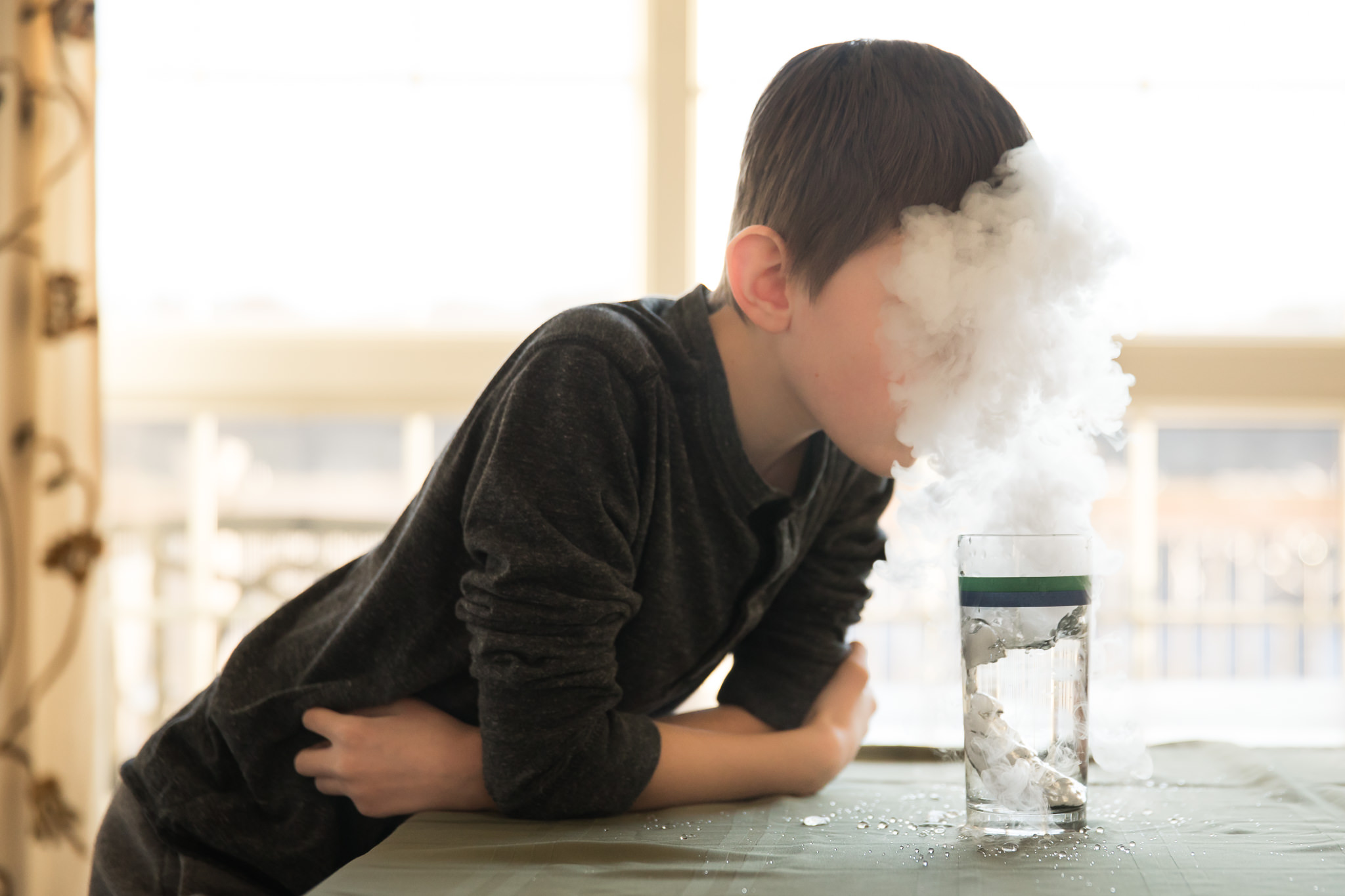 Sublimation on a plate

Admittedly, the clouds pouring over the top of a glass looked cool, so we wondered what it would look like if we did something similar on a shallow plate. Spoiler: also cool.

We placed a chunk of dry ice on a small dessert plate, and then poured warm water over or around or near it to see what would happen. Of course, it again formed vapor (it’s a bit of a one-trick pony in this regard), but the vapor moved around differently without the restrictions of the glass. Lots of cool flowing and swirling. 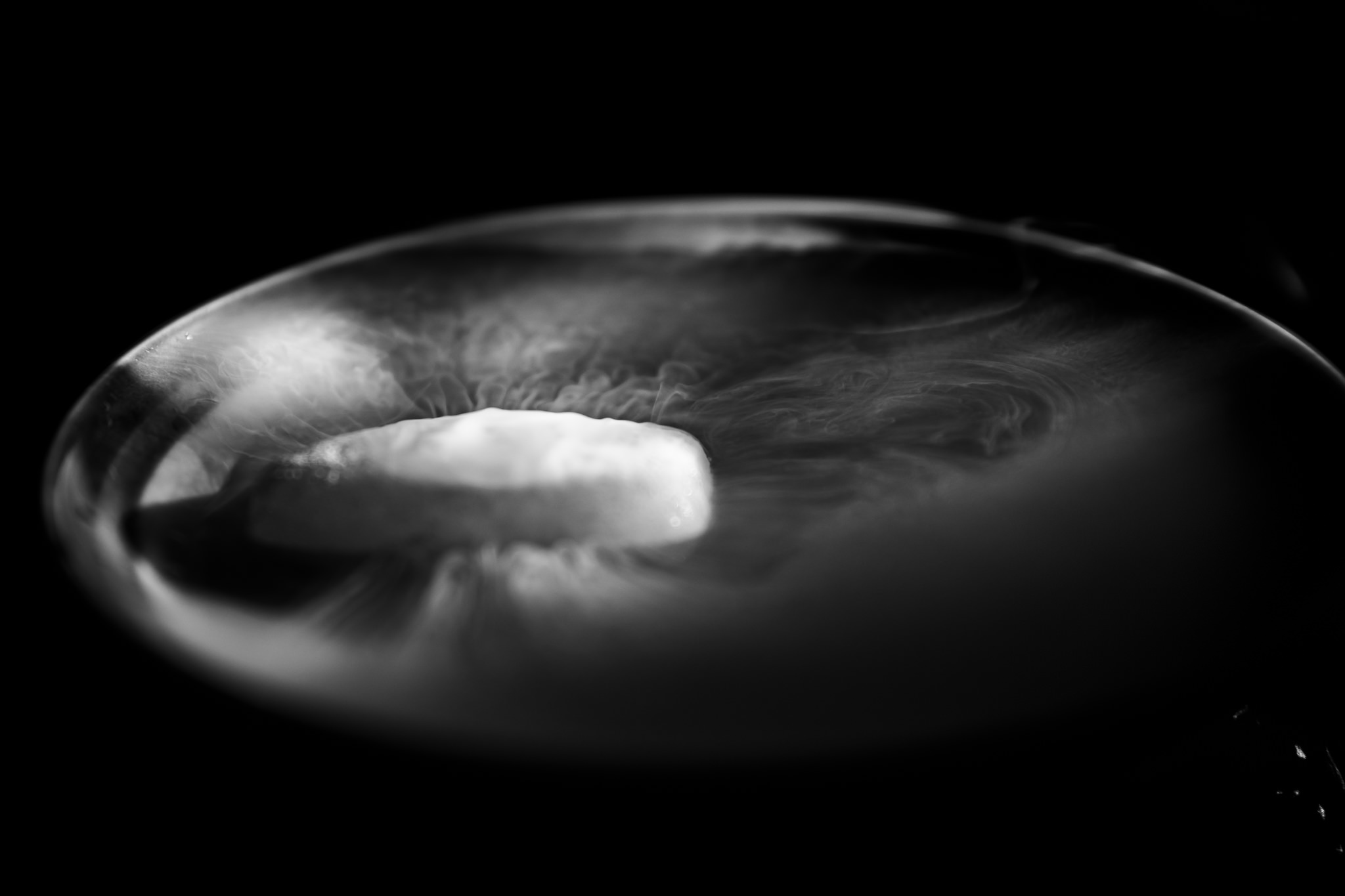 Next we made a quarter really, really warm by squeezing it in our hands for quite a while. We put another chunk of dry ice on a plate, and I then took the quarter and “pushed” the edge of it firmly into the dry ice. It took a few seconds to do this — as I could only push as quickly as it was melting a slit into the ice.

As the warm metal and cold ice met, it produced a sound somewhere between “singing” and “screeching.” The scientific explanation has to do with the carbon dioxide gas being released quickly (sublimation, again…sped up by using warm metal) and that gas “pushing” against the quarter as I was pushing down. This pressure produces sound waves; hence, the screeching. You can also produce this effect by pushing a spoon firmly onto the dry ice.

We didn’t just get to hear something cool, though. We also got to see something. As the quarter sat in its little icy slit, all the heat rushed out of it, and before long, frost began to form around the edge of the quarter. (Great opportunity to talk about how heat moves toward cooler areas.) 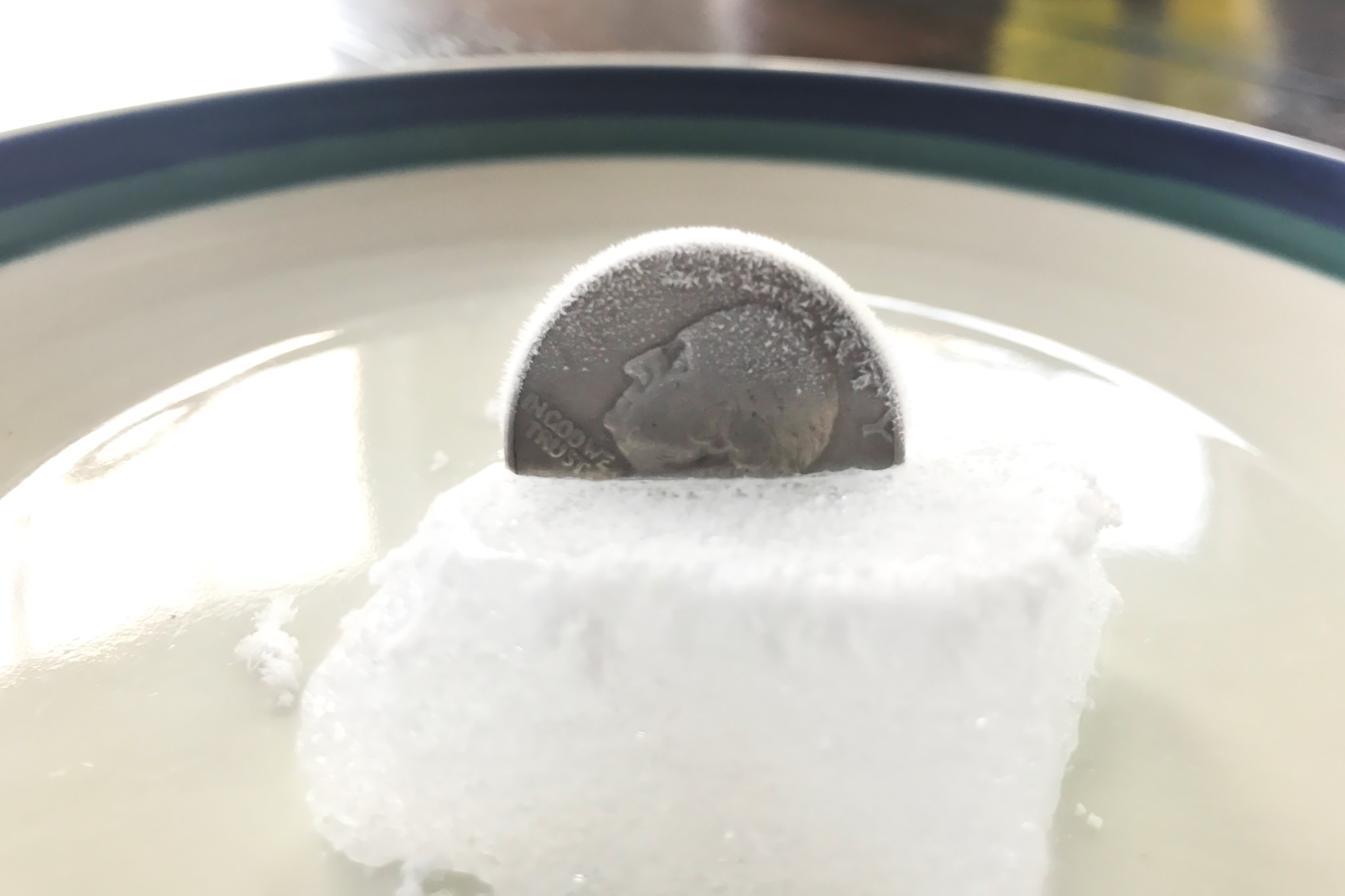 This next activity we did was pretty cool. We grabbed a bowl with a bit of a rim on it, filled it part-way with water and threw (okay, “carefully tonged”) in another chunk of dry ice.

While it started bubbling away, I moved quickly.

I had a towel folded up to be about an inch wide, and got it soaking wet in some water that had been mixed with a good squirt of dishwashing liquid. I quickly rubbed it around the rim of our bowl, and then stretched the 1-inch-wide towel across the bowl.  I then slowly “wiped” the sopping-wet soapy towel from one edge to the other — I pulled it taut and swiped across, maintaining contact with the rim the whole time. The goal is to “wipe” a film of soap across the top of the bowl, turning it into a giant bubble wand of sorts.

As the dry ice bubbled and bubbled, the vapor cloud built up and then started pushing up against that soap-bubble surface. Before long, we had what looked like a crystal ball. 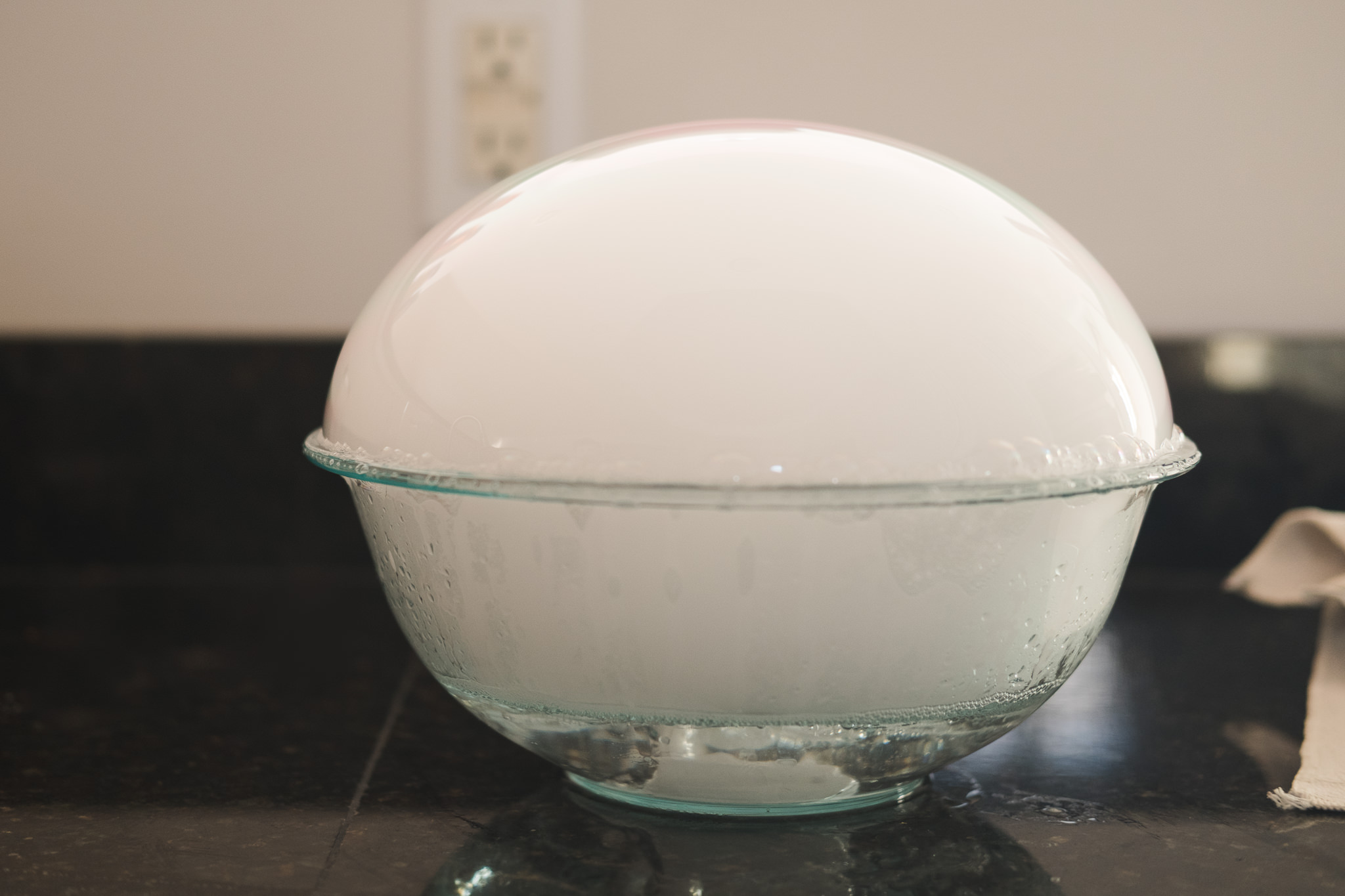 It grew and grew…and eventually popped, sending a carbon dioxide cloud out into the world in a “poof.”

Even after all the fun, we found we still had a lot of dry ice left. I didn’t want to leave it where someone might accidentally touch it (or worse yet, have one of the cats do something very un-smart with it), so I put the remaining pieces in a big bowl in the sink and poured hot water over them.

I may have been a little over-zealous, because the carbon dioxide cloud was huge, and “poured” right over the sink and down the counter. But once it slowed, our sink just looked totally cool, with a foggy layer of vapor filling it up for the next 30 minutes or so, as the dry ice slowly disappeared. 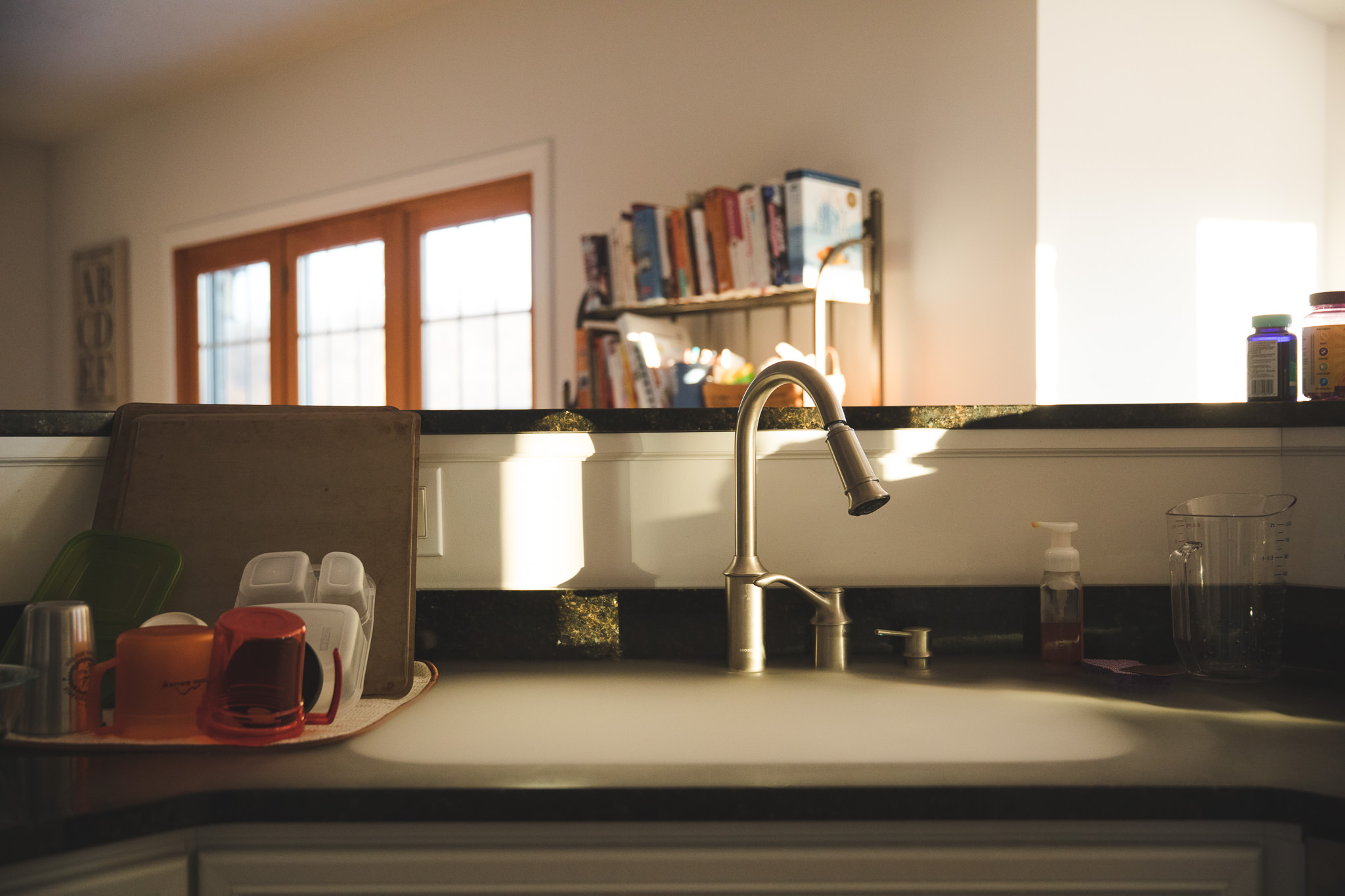 Okay, well that was probably more than you wanted to know about our little dry ice adventure. But maybe it inspired you to want an afternoon of carbon dioxide vapor fun, too.

If so, you can probably order dry ice locally. Your grocery store might carry it, or you can just Google “buy dry ice [your town or city here]” and see what comes up — we have several local suppliers.

But honestly, I think you should use this opportunity to order something delicious that has to be shipped to you using dry ice. How about some chocolate croissants? Or S’Mores Bars? Go ahead. I give you permission.