I’ve mentioned in passing that we recently completed a remodel of our basement bathroom. Or rather, we had a contractor complete it since our level of handiness is not what you would call “high.”

This project is something we knew we needed to do from the day we bought this house 5.5 years ago, and it was finally time.

And while I may post more detailed before-and-after photos at a later date, the most important thing is that we turned it from “a half-bath with a toilet located awkwardly in an alcove almost as an afterthought” to “a full bath with a lovely tiled shower.” 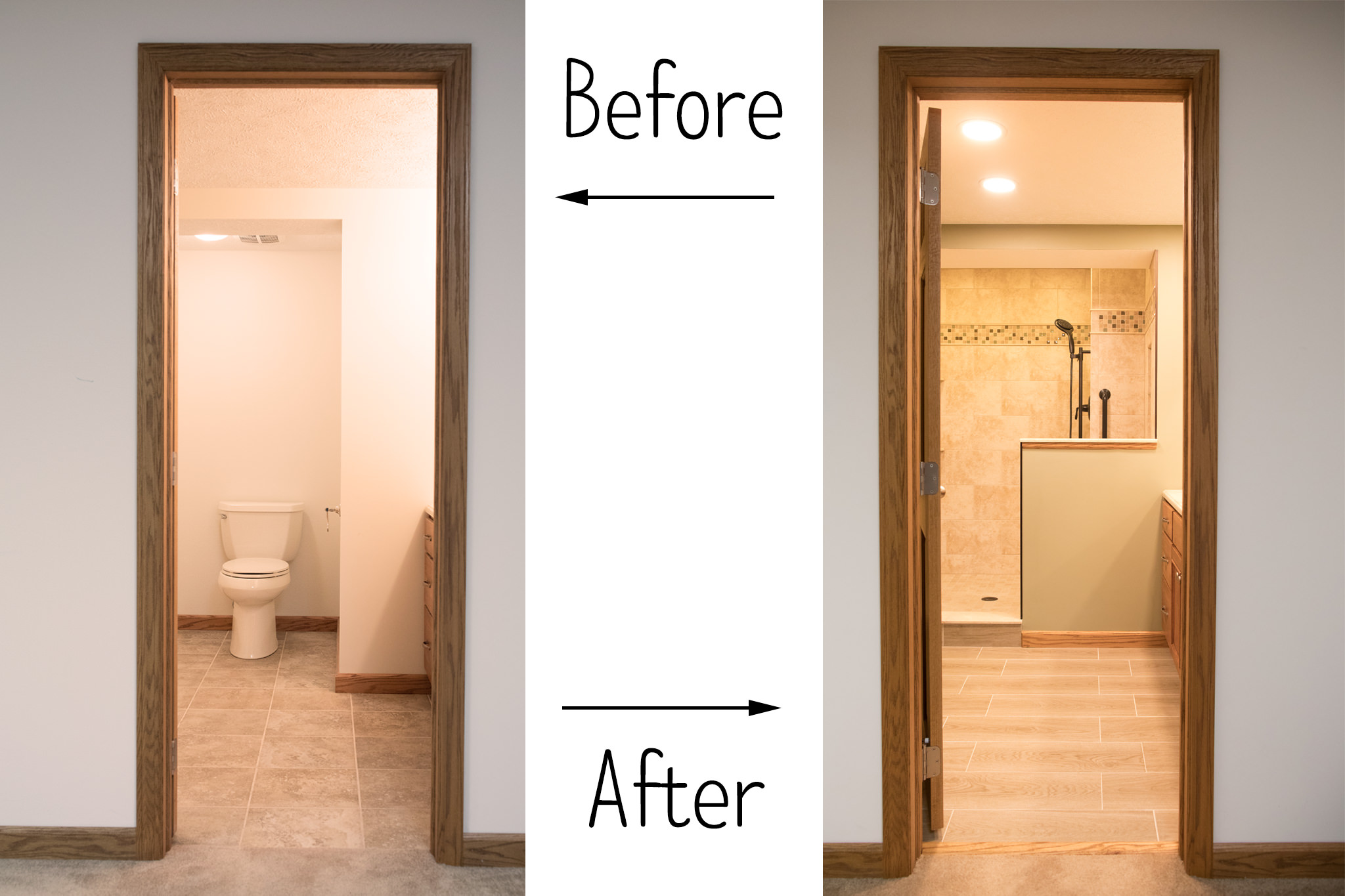 Don’t get me wrong: I’m SO glad we did this, and I’m thankful we had the opportunity to do so. It is a huge improvement and makes the basement much more functional (not to mention, way better for ultimate resale).

I have to say, remodeling stresses me out.

I know, I know. Some people just love it. They get giddy at the mere prospect of a new remodeling project. They keep a file of ideas, relish making every little design decision, and channel their inner Joanna Gaines at any and every opportunity.

I, however, am not one of those people. I enjoy watching Property Brothers or Fixer Upper as much as the next person. But I’m a much calmer individual when all of the remodeling in my life is located on my television screen and/or DVR.

Once it enters my day-to-day reality, well…I can feel my teeth clenching and shoulders hunching just from thinking about it.

Maybe I’m being a bit dramatic. It’s true that during parts of the remodeling journey I felt excitement and anticipation. And the stress level wasn’t at 100% the entire time. But… well, wait. Let me show you some charts to illustrate the emotions I felt during our recent home project.

First let’s just look at all the potential things to feel stress about in the midst of a remodel: 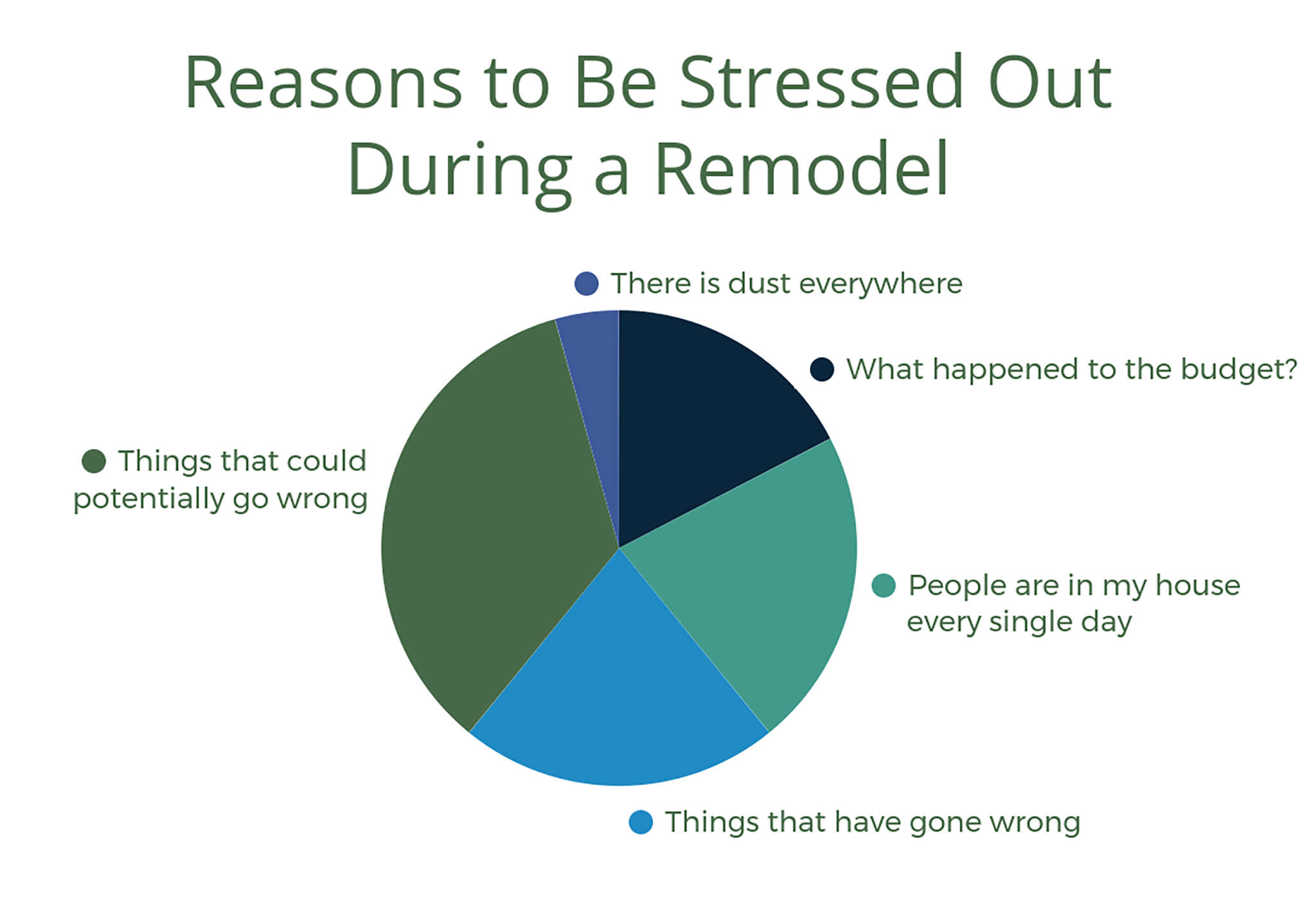 I’m sure everyone’s list is a little different, but these were my top stress-causers. Dust? Eh. It’s a little stressful to see a layer of dust coating every thing in sight, but in the grand scheme of things, I didn’t waste too much time here. The budget…wait, what budget? We used to have a budget, but we lost it somewhere along the way. Yeah, I think that’s an issue in most remodeling projects.

For an introvert like me…people here every day was a major stressor. They were very nice, and yes, they were mostly in the basement, but it just threw me off. Feeling “on call” made it hard to relax. How was I supposed to squeeze in my afternoon nap when they might need me to make a decision about grout color at any moment?

And then there’s all the stuff that goes wrong. Though as you can see, I was more worried about things that could go wrong than things that actually did go wrong. Clearly, I have issues I need to work through.

Now let’s turn our attention to the way my emotions changed over time. 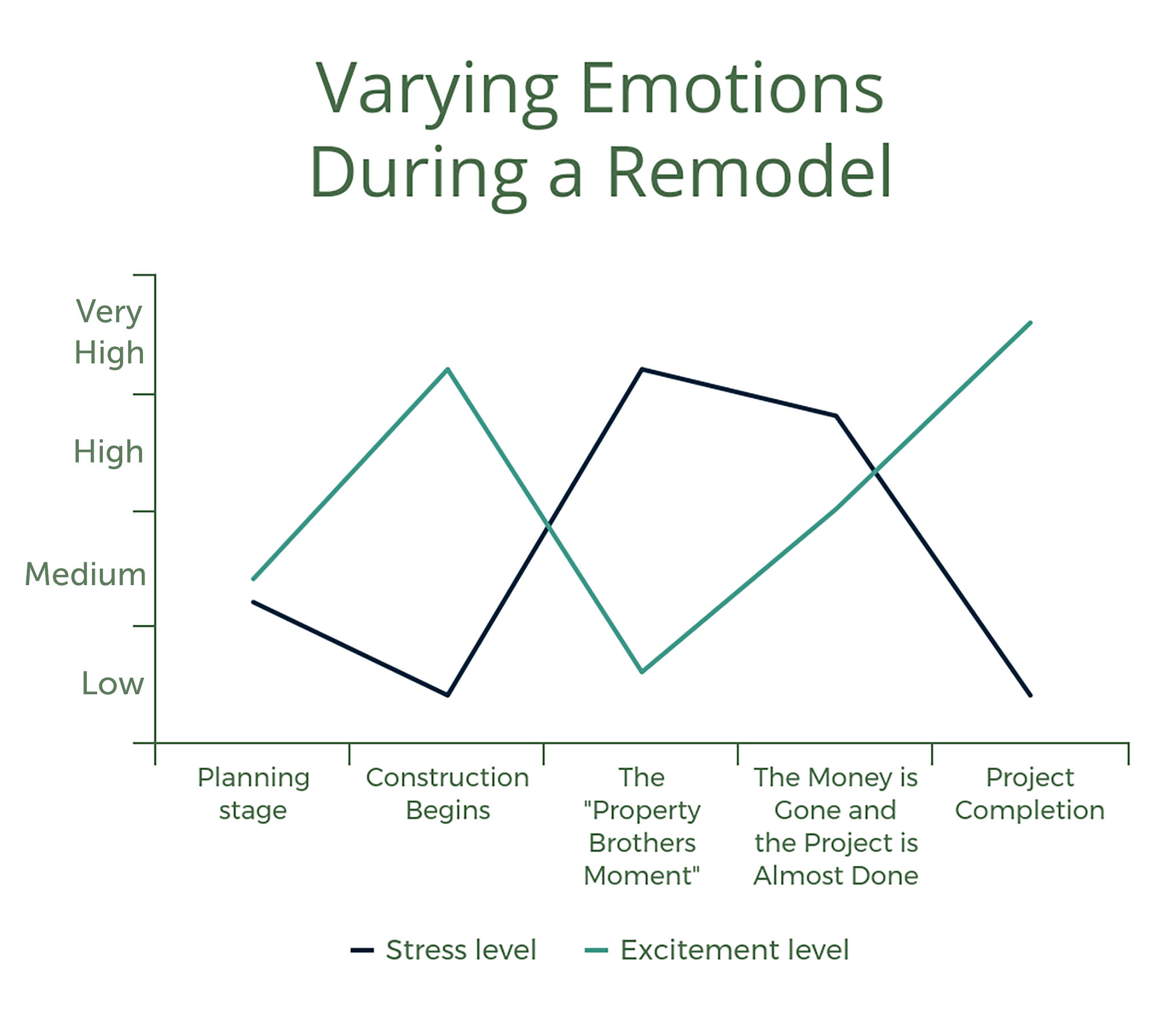 As you can see, my stress level and excitement level varied throughout the course of the remodeling project, and were often moving in opposition to each other.

Excitement rose and stress declined as we finished up the majority of the decision-making, and the construction got underway. But then came the “Property Brothers Moment.” What’s that, you say? Well, if you’ve ever watched Property Brothers, you know that there’s a time in almost every episode when Jonathan pulls the couple aside and — with a very serious look on his face — delivers the bad news.

“Hey, you know that thing you wanted to do? Well, I opened up that area of the house and there’s a load-bearing pillar / important HVAC thing / plumbing stack that’s too hard to move / etc….so, um, we can’t do it after all.”

Yes, we had one of *those* moments during our remodel. Stress rose and excitement plummeted.

Thankfully, after we got through that ordeal, stress generally decreased, and excitement generally increased as we began to see the light at the end of the tunnel.

Whew. At the end of the project, we were feeling pretty good.

Now if our cats — who do not like change, noises, or strange people in “their” house” — were to make a similar chart, it would be far more simple. Why don’t we add an overlay? 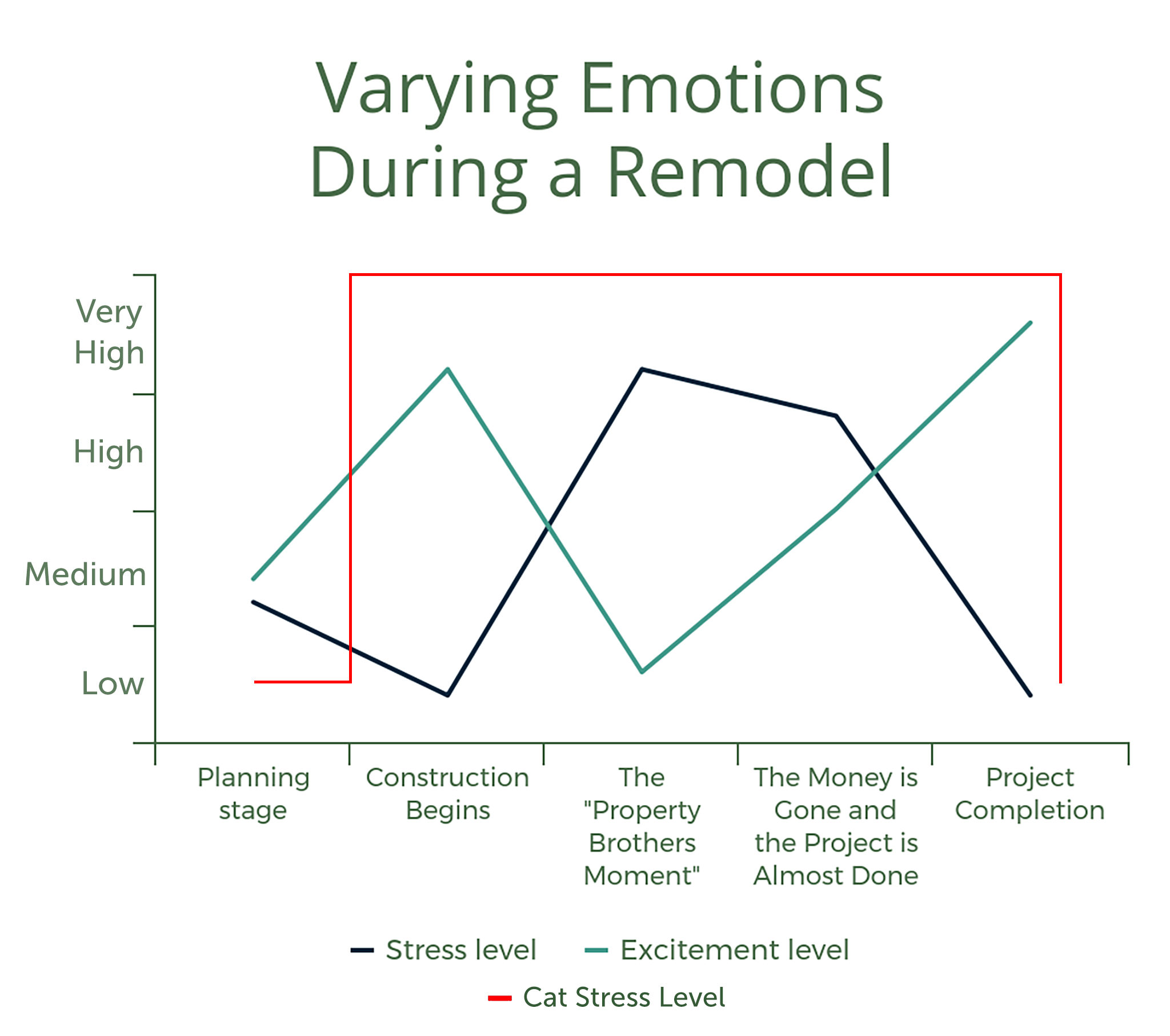 See? Simple. 100% stress as project begins. Back to normal stress levels when it is done…or maybe a little bit after, once they are convinced that those strange people really aren’t coming back anytime soon.

A friend of mine recently compared the stress of a remodel to the pain of giving birth. “The memories fade over time, and then you’re ready to do it all over again.”

I mean, I know there are other projects in this house that need to be addressed. And it’s highly doubtful that I could get away with moving to another country while someone else deals with them.

So we’ll have to see. Maybe the memories will fade and I’ll be left with only a lovely basement bathroom and happy thoughts.

In the meantime, I’m going to enjoy our new shower and squeeze in another afternoon nap.